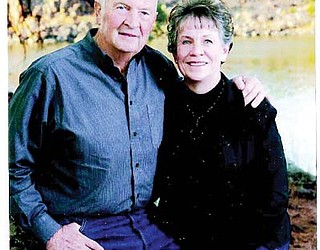 (Editor's note: The following story originally appeared in the White Mountain Independent Feb. 28. The Hatch family is prominent throughout northern Arizona. Our thoughts and prayers are with the Hatch family.)

SHOW LOW, Ariz. - On the morning of Saturday, Feb. 4, 2012, a blanket of heavy fog socked in Show Low Airport. When the fog lifted and the skies cleared Gerald and Ruth Hatch were gone. A void was left in White Mountain communities that sent ripples of shock far and wide.

Gerald and Ruth built a legacy in family, in business and in their community. Gerald was born April 10, 1945 to C.R. and Fenla Rogers Hatch. Ruth was born March 6, 1945 to Jesse and Louie Van Wagoner Smith. Gerald and Ruth were high school sweethearts. They were married in June of 1967.

The Hatch family legacy runs deep with sons Garrett, Gentry, Rob, Guy, Ruben and G.R. and their daughter Jessica. That legacy will continue for many generations to come.

Hard work was always a part of Gerald and Ruth's mentality. From the time he could stand, Gerald was helping his dad, C.R., at the family's Sunrise dairy. Ruth learned a strong work ethic as well, working at Smith's grocery. They continued the pioneer spirit in teaching their children that hard work is rewarding. Money was always earned so nothing would be taken for granted. Those tenets still ring true. It is not uncommon to see one of Gerald and Ruth's grandchildren doing chores around the Hatch dealerships

Gerald got his start in the auto business by selling used vehicles at his father's Hatch Saw and Cycle on Main in snowflake. That dealership was located where the present Snowflake Justice Court sits. His tenure as a "car guy" started over 40 years ago. He never looked back. As the Hatch family's used car inventory grew, so did Gerald's passion for the business.

In 1978 Gerald became a franchised Chrysler automobile dealer and soon after a GMC franchise. In 1988 he and his brother Roger built and opened Hatch Motor Company on the Deuce of Clubs in Show Low. In 2002 Gerald purchased Winslow Ford and in 2007 he bought Fuller's White Mountain Motors to create Show Low Ford.

Gerald's passion for the automotive business has been contagious. All his brothers own their own dealerships. His brothers are Rick who owns Hacienda Harley Davidson in Scottsdale; Charlie, Hatch Brothers in Sanford; and Roger, Hatch Toyota and Show Low Motorsports in Show Low. Gerald's sons are carrying on the family tradition: Gentry Hatch, Hatch Motor Company Show Low; Robb Hatch of Hatch Motor Company Snowflake; Guy Hatch of Show Low Ford; and his nephew Chaz Hatch of Hatch Toyota.

The first time I met Gerald Hatch was at the Snowflake dealership 10 years ago. I was outside the store taking pictures of vehicles for an ad. After the introductions he said, "Are my boy and his crew takin' good care of you?" I assured him they were. There was a comfortable familiarity in Gerald Hatch. He always let me know where he stood. He didn't mince words and used them with economy much like an Arizona cowboy conserves sips of water. Gerald had the steel resolve of a western gunfighter as he analyzed and sized up each word spoken to him.

That same resolve is ever present with his children and obviously it has come in handy during this difficult time. At one point, Gentry Hatch educated me in the family dynamics. He described his brother Robb as the patient peacemaker in the many fraternal disputes. Robb is also known for his sacrifices for others. Those qualities have served him well as he has had to do more than his share of healing. Gentry explained Robb's personality as that of a technician who always plans ahead. "Robb picks his spots like a gentleman boxer who exploits his opponent's weaknesses." That competitive spirit permeates the Hatch family.

Gerald usually only contacted me when he had issues with his advertising. He would call and ask me to meet him at one of the dealerships. Our meetings were usually brief, concise and one-sided, as Mr. Hatch clarified his position in the marketplace. After a certain meeting that Gerald, Guy and I had, I once asked Mr. Hatch, "Sir, I am always happy to oblige your requests to get together for meetings. But one of these days can we meet when you are in a good mood?" He roared in laughter, slapped his knee, looked at Guy and said, "I think we have reached an understanding." That is how I choose to remember Gerald Hatch. Because that is how he lived his life. Gerald believed there was a time and place for all things.

I met Ruth Hatch over the phone. Her voice was like sweet tea. My mind traveled back to my childhood and ranch life. In my mind's eye Ruth seemed the consummate ranch partner. Although our conversations usually had to do with business we would chat about our families during the course of business. Ruth's voice exuded a genuine compassion and that compassion transcended all limits of technology. Mrs. Hatch spoke in glowing and reverent tones when she spoke about her family. There was never a doubt that the sun rose and set with her family in her heart. After their sons and Gerald had gone hunting this last fall Ruth called me. "Wiley, do you think your tea could help me with some photos?" I agreed to help. Ruth wanted to create one photo from several so that she could get Gerald and her boys into the same frame. That is how I will remember Ruth, bringing her family together with her motherly love.

Like many White Mountain residents, I have tracked Robb and Kelly Hatch's progress vicariously through Guy's Facebook posts on Gerald and Ruth Hatch's memorial page. When I read those updates I can hear Ruth's voice. Her compassionate spirit is ever present.

I got to spend a few minutes with Gentry and Guy recently at their respective dealerships. After taking care of business matters, Guy was going to Robb's house to get a few things to help out his brother. Gentry was also seeing to business. I expressed my condolences and commented on how well their management teams kept their dealerships running smoothly. It speaks volumes of their leadership and the legacy their parents built. Gentry said, "Under their tutelage we are able to sustain that legacy. The Hatch family will always be in the car business on this mountain. Our goal is to grab the keys and perpetuate growth in the memory of Gerald and Ruth Hatch." Gentry's eyes had that familiar steel resolve of Gerald Hatch.