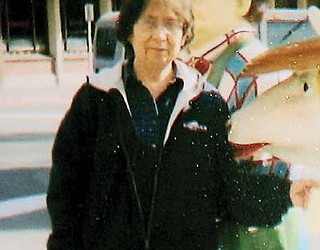 Janie Norris, a much loved mother and grandmother, passed away peacefully Dec. 18, 2012, in Tucson, Ariz. She was born Sept. 9, 1932 in Toadlena, N.M., to Chee and Daisy Taugelchee. She attended boarding school in New Mexico and high school in Oklahoma. In Tuba City, Ariz., she met Herman Norris. They married, raised a family there and she worked at the local hospital for many years.

She is preceded in death by her husband, Herman Norris; son, Thurman Norris; parents, Chee and Daisy Taugelchee; brother, Junior Taugelchee; and most recently her brother, Chester Taugelchee, passed on and joined her and loved ones in Heaven.

A memorial service for Janie will be held Jan. 19 at 11 a.m. at the Tuba City Assembly of God Church, 331 Peshlakai Ave., Tuba City, Ariz. 86045. A potluck luncheon will follow. For information, email 2grayhlz@gmail.com. Donations can be made in Janie's memory to the Alzheimer's Association.