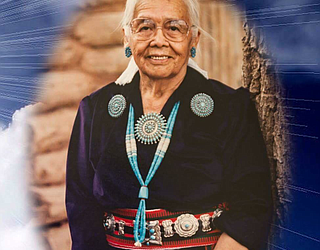 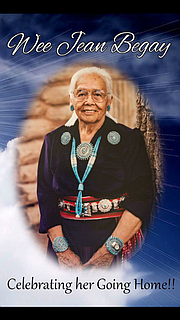 She went home to meet her Savior on Oct. 9, 2017 in Tuba City, Arizona. She was surrounded in love from her family and friends for the time leading up to her passing.

Wee Jean worked and supported her large family in many unique ways. During WWII, she worked at the Belmont Army Depot before starting her family. She had no formal schooling so she was resourceful and talented in making and selling Navajo rugs, traditional outfits, jewelry, and many other arts and crafts.

Nothing she did was more important than sharing her testimony and faith in Jesus Christ. She became a Christian in 1961, after which she continually supported people in her church, and shared the word of God to anyone who would listen. She witnessed every weekend to people in jail and in the hospital. She continued with her strong Faith in God to her passing, and we are sure her Father God greeted her saying, “Well done, my good and faithful servant.” - Matthew 25:23.

The family of Wee Jean Begay wishes to acknowledge the many expressions of love, concern, and kindness shown to them during this time of bereavement. May God bless you and embrace you. Wee Jean believed in love and prayer, her favorite Bible verse was: “Pray without ceasing” - 1 Thessalonians 5:17