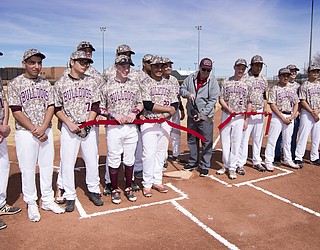 Story by Todd Roth, for the Navajo-Hopi Observer

The baseball infield was completely flattened and leveled, a new pitcher’s mound was built with design help from two professional baseball grounds keepers and all of the grass was reseeded with a special type used for pro fields.

The Winslow High choral sang the National Anthem as the flag was raised to start the game.

Free hot dogs and drinks were available at the snack stand as part of the celebration.

The Winslow baseball team sported new uniforms with a digital-camo design honoring Colonel Jay Vargas, who was raised in Winslow.

Vargas was awarded the Congressional Medal of Honor for his actions during the Vietnam War.