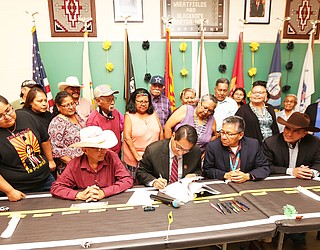 WHEATFIELDS CHAPTER, Ariz. — On Aug. 11, Navajo Nation President Jonathan Nez signed a contract with the Navajo Engineering and Construction Authority (NECA) to begin Phase 1 of a $31.8 million-dollar project to expand the width of N12 between the north end of Wheatfields Lake and the Tsaile intersection.

The Navajo Division of Transportation (NDOT) joined the Office of the Navajo Nation President and Vice President and the Tsaile/Wheatfields/Blackrock Chapter in celebrating a contract signing that will start construction on expanding and improving over 10 miles of Navajo Route 12.

“I want you to know that economically, you have grown your own. $1.8 million from the Nation’s coffers were contributed to this project by virtue of sales tax revenue.”

The project prioritizes safety concerns of the local community to widen the road and create shoulder lanes on the heavily trafficked N12. The scope of the project also includes: grading, drainage, and pavement and bridge construction.

The signing was momentous for a community that has long awaited road improvements on N12. NDOT Division Director Garret Silversmith said he felt blessed to be involved in the project and that he looks forward to its completion.

“Phase 1 of this project will cost approximately $32 million and it’s worth every cent,” Silversmith said. “Next month, NECA will start tree thinning to prepare for construction which will start in Spring 2020.”

Honorable Nelson BeGaye (Lukachukai, Rock Point, Round Rock, Tsaile/Wheatfields, Tsé Ch’izi), who resigned from his seat during the 24th Navajo Nation Council’s summer session, encouraged his community to take pride in their accomplishments.

BeGaye spoke of how transportation in the area had developed from horseback riding trails to roads for horse-drawn wagons and eventually motor vehicles.

“My late father planted wheat fields, which is what this area was named for. This community fed the Navajo Nation,” BeGaye said. “We are blessed with the teachings of our elders and I am a product of my elders.”

The vision of developing and improving transportation in the area comes from these teachings, he said.

“With the vision of our elders and our leaders, we have come this far,” BeGaye said. “This is your day.”

At the signing, Tsaile/Wheatfields/Blackrock Chapter president Zane James provided historical context behind the development of the N12 project. James said the project was driven by grassroots efforts, a multitude of chapter meetings, and coordination with federal, state and tribal agencies.

“This road project gained momentum in 2012 when the chapter coordinated with the Arizona Department of Transportation, Bureau of Indian Affairs, Federal Highway Administration and Colorado State University to conduct a Road Safety Assessment,” James said.

The assessment was initiated under the guidance of NDOT planner Marco Sells and ADOT’s Mike Blankenship. It provided agency officials with a first-hand evaluation of the narrow roadway that accommodates heavy traffic between Tsaile and Wheatfields.

“It took the efforts from past leaders up until today,” James said. “The road assessment helped the project to gain momentum.”

Nez said the prayers of community had brought forth the day’s benchmark contract signing.

“This is a big milestone for the community and that’s why we’re here today,” he said. “This celebration is about a road but it’s also about a nation moving forward with the ability to do provide for its own.”

The N12 project reaffirms the virtues of self-reliance and self-sufficiency in building infrastructure that further supports economic development, tax revenues and community governance, according to NDOT.

“Good roads bring economic development,” Nez said. “With this road, we’re saying that we have the ability to do it ourselves. That’s true self-reliance and this mentality starts with the local community.”

Vice President Myron Lizer supported BeGaye who said the community has always “grown their own” when talking about the wheat fields once farmed in the area.

“I want you to know that economically, you have grown your own,” Lizer said. “$1.8 million from the Nation’s coffers were contributed to this project by virtue of sales tax revenue.”

The presidential initiative to ‘Buy Navajo’ supports local communities by putting tax revenues toward projects that invest in infrastructure, like N12.

On behalf of NDOT, Silversmith extended gratitude to the BIA Navajo Regional Office, past and present leadership within the Executive and Legislative branches, leadership from the Tsaile/Wheatfields/Blackrock Chapter, and NECA.

“Community members, this is all for you,” Silversmith said. “This will be a nice thoroughfare and today, we are very blessed to be a part of the celebration.”