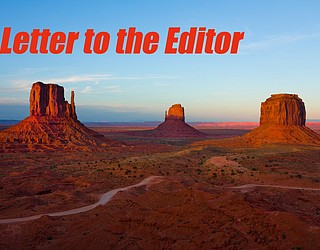 Did you know the Navajo Nation has undertaking 24 renewable energy projects over the past 15 years and none succeeded?

Twelve of those projects the Navajo Nation itself has invested in the feasibility and pre-development phases. One of them is the Paragon Ranch Solar Project.

Twice before outside developers have placed major dollars into the Paragon Project and each time, they have confluced it’s not a money maker.

Here we are again taking state and tribal money and investing in Paragon Ranch. Before the tribe proceeds, it should ask the question, where is the market? In other words, where is the power going to be sold?

It clearly will not be to the Navajo people. The Nation only has 40,000 families that buy electricity for their homes. Remember, Navajo is not where the market is. The market is in the big metropolitan areas such as Phoenix, Las Vegas and Denver.

Transmitting or moving the power is also another major cost that has made Paragon unfeasible. Again, developers, not governent, have looked hard at the cost to move power from a remote area such as Paragon Ranch to a market.

Each time the assessment for the project has come back that it is unfeasible. Now, the tribe is going to inject more tribal government money with the state to try to make it feasible. This is total madness. Council needs to stop this madness.

We don’t have class 4 wind and no control if the wind blows or sun shines every day.

Understand that this project is again being proposed to be funded by the taxpayers and Navajo money. In other words, the government is wanting to fund the project.

Projects such as Paragon Ranch have a hard time succeeding because they are funded by the government. When private businesses develop projects, they develop them to be successful. Two things business always does is generate revenue and jobs. Government is only good at spending money, not generating revenue.

These are hard questions every Navajo should be asking President [Jonathan] Nez. How much revenue and how many jobs will Paragon Ranch create before we throw more tribal government money to this project. This mentality that government-funded projects are going to bring much needed revenue and jobs to the Navajo Nation is false and is wishful dreaming. The green madness has to stop.

The Navajo Nation has to stop becoming the laughing stock of the West. Especially when it comes to being an energy player. Navajo needs to have a diverse, reliable, stable and affordable energy portfolio. Renewable industry is not really regulated with no proper waste management.

We are blessed with natural resources such as oil, gas, helium and coal. Let’s use those resource, which the holy people provided the Navajo people. More importantly, they generate more revenue and create real jobs.

Council has to ask these tough questions before wasting more Navajo money. With all respect to President Nez and Navajo Nation Council (tribal gov.) are no energy experts and they don’t have any energy experts on their staff.