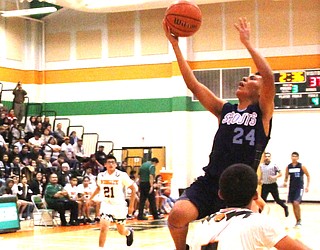 WINGATE, N.M. – The Fighting Scouts (4-5) of Window Rock, crossed the border into New Mexico to play an interstate basketball game with the Bears of Wingate (0-1). This game was a season opener for the Bears and was won by the Window Rock Scouts, 63 – 46.

“We are going to come out, run our offense and defense in the opening half,” said Window Rock Coach Tom Bizardi. “Then we will make some adjustments in the second half and see how the game plays out.”

The Bears were the first to score with Bear point guard Kevine Belone connecting on an NBA three point basket sending the home crowd Bear fans into a frenzy.

The Fighting Scouts then scored with a basket by junior Cauy Silversmith and an old fashion three point play by Caden Bia with an assist by Marion Ynunza. The Scouts then led 5 – 3, early in the opening quarter.

With this mini run the Scouts were able to take the lead for the rest of the game.

Window Rock outscored Wingate the rest of quarter and led 18 – 8, as the first quarter ended.

The Scouts continued to dominate the game, outscoring the Bears in second frame, 11 – 5 and led at intermission break, 29 – 13.

Wingate’s Belone hit 5 three points in the first half and Window Rock Coach Bizardi assigned a lankier Scout to defend him.

The Scouts’ Isaiah Begay made a two point basket that ignited a 15 – 0 run, in the third quarter, the Scout enjoyed a comfortable lead, 46 – 23.

Both teams, substituted freely giving nonstarter some playing time and gaining valuable game time experience. Window Rock traded baskets with the host in the final quarter. The final score of 63 – 46 was in the Fighting Scouts’ favor.

“We are in the midst of understanding to run our offense,” Bizardi said. “We run our offense, then our defense kicks in. We are trying to understand ourselves and see what we are doing during our pre-season games. We should be ready when we begin playing district games.”

Sophomer Trajon Bizardi scored a team high of 18 points and Senior Marion Ynunza added 11 points, to the winning score for the Scouts.

“Window Rock Scouts were a polished team – tonight, they were better shooters and ball handlers,” said the Wingate coach. “We play better teams in pre-season to makes us better and get us ready for our district games. Overall, I am happy. We learned and saw some good things that we can work on.”