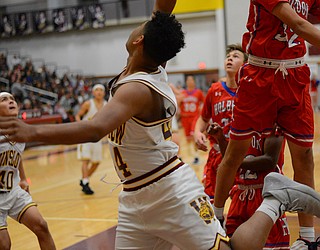 In the girls’ game, the Lady Bulldogs defeated the Holbrook Lady Roadrunners 61-50. The win improved Winslow’s record to 15-2 while Holbrook fell to a still excellent 14-5 for the season.

Kelli Mitchell led the Lady Bulldogs with 13 points. Justine Butterfield was also in double figures for Winslow with 10 points. Matehya Aberle led all scorers with 14 points for the Holbrook Lady Roadrunners.

In the boys’ game the Bulldogs defeated the Holbrook Roadrunners 66-60. The win improved Winslow’s record to 12-4 while Holbrook fell to 7-9 for the season.

The Bulldogs led 16-9 after the first quarter, 30-27 at the half and were up 46-40 entering the final period. They held that lead with their 66-60 victory. Darius James was the leading scorer with 24 points for the Bulldogs. Zach Wagner was also in double figures for Winslow with 13 points. Kobi Koerperich led Holbrook with 23 points.