Out and about: hiking the Kachina Trail 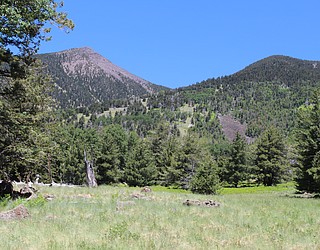 Doyle and Fremont Peaks can be seen from the Kachina Trail. (Stan Bindell/NHO))

FLAGSTAFF, Ariz. — Beauty and diversity make the Kachina Trail in Flagstaff one of the best hikes in the state.

Many hikers on this trail give it a “wow.” Grandson Scott Johnson puts it in perspective by calling it National Geographic quality.

The Kachina Trail is especially popular in the fall because of its falling leaves and spectacular fall colors. But there are many reasons to hike Kachina Trail during the summer.

Aspens are abundant on the Kachina Trail. Sometimes lining the trail and often giving hikers a respite in the shade. Fir and spruce are also abundant on Kachina Trail, but they don’t stand out like the aspen.

The beauty of the aspens are doubled by an amazing amount of ferns whose greenery gives a nice contrast to the aspens. In some of the meadows along the trail, the ferns seem to go on forever and sometimes the hikers must go through them as they create a fern forest. Johnson goes six-foot one-inch yet many of the ferns were taller than him.

The Kachina Trail starts at more than 9,350 feet in elevation. It often dips down to 8,800 — there are many ups and downs. One of the 200 foot climbs coming out in the sun made for a huff and puff. This hike is rated as ‘hard’ by ‘Flagstaff Hikes’ book by Richard and Sherry Mangum, but the trees give plenty of shade for breaks and hikers can turnaround whenever they want.

The Kachina Trail is 9.8 miles roundtrip, but hooks into trails leading to Doyle Saddle to the left or Friedlein Prairie Road to the right. We did a bit of both to make it into a 13 mile hike.

The Kachina Trail can be rugged due to its rocky terrain and some scree on parts of the trail, but most of the trail is clear.

About one mile into the hike, a Kachina Peaks wilderness sign pops up.

A bit after the wilderness sign on Kachina Trail comes the most rocky part of the trail and a short time after that a small cave appears for another shady break and the temperature cools by a good 15 degrees.

Lupines were abundant with some firecracker penstemon and wild irises among the flowers.

The scenic views are also incredible. Whenever there is a break in the trees Flagstaff can be seen below and Doyle and Freemont Peaks can be seen above. There are some areas on the trail where there were burnt out trees, but those areas also offered great views.

Horses are allowed on the trial, but one sign warns that it is a rugged trail for horses. Some of the hikers had their dogs with them.

Of course, the higher elevation means cooler temperatures during this recent hot spell.

I have hiked the trail numerous times and never regret it. Some years ago, I saw a black bear with her cubs near the trail, but this time was not so lucky. However, the Kachina Trail makes for a great day hike.

Directions from Flagstaff: Take Highway 180 to Snow Bowl Road. Turn right and go 13.7 miles to the sign for Kachina Trail. The parking lot is on the right.