Native boys can dance, too 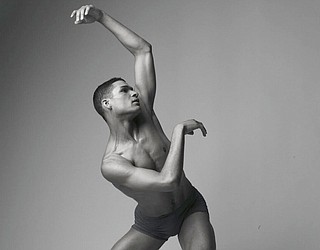 PHOENIX — Jock Soto has a vivid memory from when he was five, of changing in the backseat of his father’s car into a pair of lacy blue tights on his way to his first ballet audition in Phoenix, Arizona.

Adam McKinney was 17 when he received a book featuring photos of Alvin Ailey dancers and he recalls being instantly enamored with them.

“I practiced those shapes over and over and over again. I went as far as cutting out my face from other photos and placing them on the dancers bodies,” he said.

Soto had a 24-year career in ballet and McKinney is still dancing after 16 years. That’s how long it’s lasted for these two Native boys who dance.

Each one bristled recently when a national news anchor blithely wondered at how long young Prince George of Cambridge would remain interested in dancing ballet.

“This whole situation was pretty infuriating,” Soto said. “That’s been my whole life.”

Born to a Navajo mother, Soto was already a hoop dancer when he happened to watch the Ed Sullivan show one night. Soto was riveted by the graceful movements of Edward Villella who was performing The Nutcracker ballet.

He imitated the dance for days and bugged his mother to find a local ballet company.

“I told my mom that’s the kind of dance I wanted to do,” he laughs at the memory of his macho Puerto Rican father doing his best to buy an outfit for his audition.

Unbeknownst to Villella at the time, he just inspired one of the best of the next generation of male ballet dancers.

“He’s the whole reason I started,” Soto said. “I did pretty well.”

Pretty well is quite an understatement.

Soto was 13 when he left Arizona to study ballet in New York and wound up becoming the principal male dancer for the New York City Ballet.

Three years after arriving in New York, famed choreographer George Balanchine took him into his company.

“My whole word revolved around dancing all day long. I had to establish who I was and fight for being better,” he said.

He describes long days that started at 10 a.m. and often didn’t end until 11 p.m.

That dedication to constantly improve helped craft a career that included ballets choreographed especially for him, plus a guest appearance on Sesame Street, a friendship with famed pop artist Andy Warhol, a documentary about his career and a biography, ‘Every Step You Take: A Memoir,’ plus many more accolades.

“I am Black and Jewish,” McKinney said. “My family’s affiliation and my family’s claiming of Native heritage was not made known to us until later in life. I grew up as a Black Jewish boy.”

His family ancestry includes ties to the Blackfeet and Cherokee Nations and it was the Native community in Wisconsin who welcomed McKinney into ceremonies.

“It was through my deep relationships in Milwaukee with the Oneida Nation that we were able to participate in Native cultural gatherings and ceremonies,” he said. “In that way, I was able to reconnect to my Native heritage.”

Thirteen years after he first saw the photos of Alvin Ailey dancers, McKinney joined the company.

“I found myself in the Alvin Ailey American Dance Theater dancing the same dances that were photographed in that book. Unknowingly I was creating for myself a tangible vision that I later stepped in to,” McKinney said.

Both Soto and McKinney worked hard to perfect their art and both obviously take ballet seriously.

McKinney says he was concerned about the remarks dismissing ballet.

“It’s not about boys. It’s about girls. Boys doing (perceived) girl things. We don’t honor girls,” he said. “That’s what this issue has made more clear to me.”

“Women should be honored and uplifted,” McKinney said.

“I took her apology with a grain of salt,” said Soto adding the anchor could put some cash behind it.

“Maybe one day she will sponsor a ballet boy, provide some of her earned money to pay for a boy who wants to dance. I try to do that myself,” he added.

Today, Soto teaches ballet classes and hopes other young Native boys will take up the profession he cherishes.

“We don’t make a lot of money,” he warned. “We do it because we’re passionate. We love dancing.”

McKinney also teaches. This summer he worked with a 10-year-old Native boy in Montana.

“He’s really really passionate about dance. In the two weeks I saw amazing, amazing changes in his body,” he said.

McKinney is hopeful the youngster will have a long career in dancing because both men want to see the next Native male ballet dancer take his bow.

Than Povi from San Ildefonso Pueblo in New Mexico studies ballet following in the footsteps of sisters Marjorie and Maria Tallchief. The women were Osage and among America’s first ballerinas.