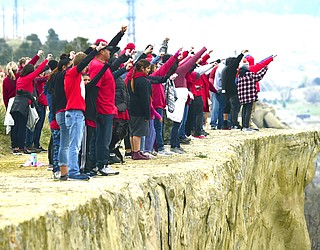 Hundreds form a line on the edge of the Billings Rimrocks for Line the Rims in Red event to honor missing and murdered indigenous people, in Billings, Montana in May 2019. (Larry Mayer/The Billings Gazette via AP)

TUBA CITY, Ariz. (AP) — Margaret Bitsue's days are filled with prayer: that her son has a clear mind and that he remembers home, a traditional Navajo hogan at the end of a dirt road where a faded yellow ribbon hanging from the cedar trees points to her agony.

Bitsue hasn't seen or heard from Brandon Lee Sandoval, the youngest of her four children, in more than two years. Wearing blue jeans, a black shirt and work boots, he left home in northeastern Arizona before sunrise Sept. 3, 2017, saying he was going to see friends in Phoenix and would be back.

Margaret Bitsue displays a flier that features her son who she reported missing more than two years ago in Tuba City, Arizona. Bitsue hasn't seen or heard from Brandon Sandoval, the youngest of her four children, in more than two years. (AP Photo/Felicia Fonseca)

"I spend most of my days looking down the road expecting him to come up," Bitsue says.

The woman's words are soft but capture a room at a government center on the Navajo Nation where people are gathered to talk not about women and girls who have gone missing or been killed, but men and boys. It's part of a growing effort to expand a movement focused on Native American women, who face some of the nation's highest rates of homicide, sexual violence and domestic abuse.

In Billings, Montana, last year, Reno Charette asked people to wear red and line the rim of sandstone rocks overlooking the city. They brought posters of men, women and children who are missing, and broadened the name of the local movement to Missing and Murdered Indigenous People.

"All of us, our general community members, we're learning more and more about it, so I appreciate the evolution," said Charette, a member of the Crow Tribe.

Late last year, the Trump administration announced it would dedicate more resources to all missing and slain Native Americans and Alaska Natives. A presidential task force that will look at ways to solve new and cold cases is scheduled to meet for the first time Jan. 29 in Washington.

"We did not want to leave any victim group out," said Trent Shores, U.S. attorney for the Northern District of Oklahoma, who is Choctaw and on the task force.

Shores said the Justice Department looked at two databases, both of which had more Native American and Alaska Native males listed as missing than females.

No one knows exactly how many Native Americans are missing because some cases go unreported, others aren't documented, and there isn't a specific government database tracking the cases, an Associated Press investigation in 2018 found.

The Justice Department also looked at a 2016 study funded by the National Institute of Justice that shows Native men are 1.3 times more likely to experience violence than non-Hispanic, white men. It doesn't specifically address deaths and disappearances, but federal officials say it points to underlying causes such as stalking, and physical and sexual violence, and a lack of shelters and treatment centers on tribal land.

Shores said an upcoming Justice Department analysis of federal databases and its own data collection process will help officials get a better sense of the problem's scope so they can tailor response plans to tribes.

"What we want to do is go back to Indian Country, tribal leaders and members of law enforcement and say, 'This is what we found, and here's where we think we need to go. We'll need your help,'" Shores said.

Pete Sands, a Navajo musician and filmmaker, welcomed the initiatives but would rather see them solidified through legislation pending in Congress.

At the Navajo Nation forum, he posed the question: Are missing and murdered indigenous men being ignored?

Men, too, suffer from addiction, sexual and cultural abuse, and absent parents, he told the audience. But they often hide their feelings.

When men disappear, people think they can take care of themselves, Sands said. "That's not always the case."

Bitsue didn't report her son missing until two months after he left because she figured he'd be back. He always came back or called to let her know he was OK.

This time, it was different. He was different. Sandoval had been getting high on methamphetamine and had started dealing the drug, she said. He was paranoid. He talked about objects flying in the family's yard and drug cartels chasing him but didn't explain why, she said.

Family members have posted fliers around the region and called Sandoval's friends for information but still know nothing about what happened to him. They routinely check detention centers and hospitals.

Bitsue mostly prefers staying at home in rural Coppermine, where she lives without running water or electricity and where her husband tends to livestock. Otherwise, she said she would be scanning crowds looking for anyone who fit her son's description: 5-foot-11 and 195 pounds, with short brown hair and brown eyes, a mustache, and tattoos on his neck and arms. The anxiety would set in, sending her heart racing.

Sandoval's name is among the roughly 160 that community leaders and volunteers have on a list of Navajos who are missing going back decades, both on and off the reservation that stretches into Utah, New Mexico and Arizona. Between 60 and 70 percent of the names are males, said Jolene Holgate, who helped organize the forum that drew health care providers, police officers, educators and local residents.

"I can't tell you how many people are missing from Navajo," said Navajo Nation lawmaker Amber Kanazbah Crotty. "To me, that's an injustice."

The initiative is called the Missing and Murdered Dine Relatives Data Institute. Besides tracking cases, the group is developing guidelines for community involvement in an area with too few police to adequately cover 27,000 square miles — the country's largest reservation.

Although the Missing and Murdered Indigenous Women movement's efforts are expanding, there's not a strong push nationally to change the acronym #MMIW, said Sarah Deer, a University of Kansas professor who has studied violence against Native women.

She believes women should stay at the forefront in leading the movement.

"Women suffer a unique intersection that, typically, men don't," said Deer, a member of the Muscogee (Creek) Nation of Oklahoma, "and that is that sexism is used as a weapon."

Trump's task force is expected to provide an update on its work in a year and produce a report in two years. Its members largely are government officials, including Jeannie Hovland, a member of the Flandreau Santee Sioux Tribe of South Dakota who heads a U.S. Health and Human Services Department agency that provides grants, training and technical assistance to tribes and tribal entities.

Tribal members called on her at the Navajo Nation forum to ensure their voices are heard.

"I want to spend my time making a positive difference, not a checklist," Hovland said. "We want to see our missing relatives come home, safe and alive. And if not, we want justice."

Kanazbah Crotty, who wore a scarf with yellow flowers in honor of a young Navajo girl who was sexually assaulted and killed on the reservation, vowed to help Bitsue spread the word about her son and provide financial resources to help find him.

Sandoval turned 34 in September. When he was younger, he helped take care of livestock, did handyman work and was "just a wonderful kid," Bitsue said.

He has three sons of his own.

"It's so hard to wake up and face another day," Bitsue said, her words muffled by sobs. "I have accepted the fact he might be gone, but I still have that little hope."