Window opens for tribes to seek licenses for internet access 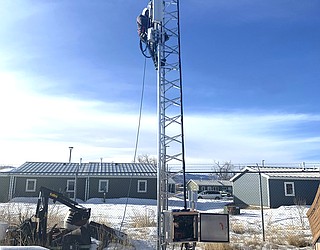 FLAGSTAFF, Ariz. (AP) — The Federal Communications Commission opened a window Feb. 3 for federally recognized tribes to apply for licenses that could help establish or expand internet access on their lands.

Tribes had pushed to be first in line for mid-band spectrum licenses that largely are unassigned across the western United States and once were reserved for educational institutions. The 2.5 Ghz-band of spectrum — channels of electromagnetic waves — are seen as key to expanding 5G access.

The FCC estimates that about one-third of people living on tribal lands don’t have access to high-speed internet, but others say the figure is twice as high.

“I’m not speculating when I saw that this spectrum could deliver major benefits to rural tribal communities,” he said.

Some organizations see limits to the licensing rules that they are challenging with the FCC.

Land designated for Native Hawaiians is included in the push to expand internet access to rural, tribal areas. But, Native Hawaiians can’t apply for the licenses because they’re not among the 574 federally recognized tribes.

The Department of Hawaiian Home Lands is asking the FCC to waive the eligibility requirement so it can apply on behalf of Native Hawaiians who live on homesteads across 318 square miles (823 square kilometers) on six islands.

“This trust relationship is uniquely similar to that of federally recognized tribes and, yet, not affording Native Hawaiians a similar opportunity for access to spectrum licenses creates an inequity that is contrary to the public interest,” the department wrote to the FCC last month.

Burt Lum, broadband strategist for the state of Hawaii, said the home lands have varying degrees of connectivity.

“It’s technology enabling a community for self-determination,” he said.

One of the largest organizations representing tribes, the National Congress of American Indians, is asking the FCC to reconsider eligibility requirements, particularly when it comes to the definition of tribal land and the inclusion of “rural.” The organization said tribes that don’t have reservations or that don’t have contiguous parcels of trust land would be left out.

The FCC defined rural tribal lands as being outside urbanized areas and with a population of less than 50,000 people. The National Congress of American Indians said that could exclude tribes with land near Seattle or Phoenix, for example.

“This trust relationship and responsibility applies equally to all federally recognized tribal nations, not just to certain sub-sets of tribal nations based on the location of tribal lands,” the organization wrote to the FCC.

Federally recognized tribes and tribally owned entities, including colleges and universities, are eligible to apply for the licenses under the tribal priority.

Maps on the FCC’s website show tribes what spectrum is available over their land. The FCC staff also has been traveling across the country meeting with tribes to explain how the licensing works.

Mariel Triggs also has been reaching out to tribes and testing small networks on tribal lands. Triggs, chief executive of the nonprofit MuralNet, recently worked with the Havasupai Tribe deep in a gorge off the Grand Canyon to set up a community network.

“I’m really excited to see what we can learn from the networks they build,” she said. “How can you do it differently?”

Any tribe that receives a license must prove it is putting the spectrum to use. Licensees won’t be able to sell or transfer their licenses until they make the spectrum available to 80 percent of the population in the license’s coverage area within five years. The licenses can be leased.

The spectrum remaining after the tribal window closes will be auctioned off for commercial use. The telecommunications company, Sprint, is among the largest users.