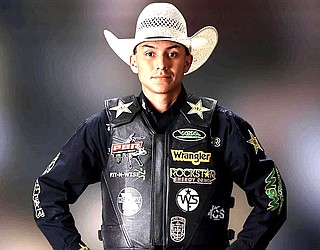 Top PBR centendor Cody Jesus finished a career best at No. 20 in the world. (Photo/Facebook via Office of the President and Vice President)

PUEBLO, Colo. – The fourth edition of the PBR Global Cup, the only nation vs. nation bull riding competition, will make its second stop at AT&T Stadium in Arlington, Texas Feb. 15-16.

The new team tournament debuted in Edmonton, Alberta, in November 2017, visited Sydney, Australia, in June 2018, and most recently stopped in Arlington this past February.

McBride and Hart elected to not name an alternate.

For Team USA Eagles, while the quartet of new additions have only made a collective four appearances at past PBR Global Cups, they are arguably four of the hottest riders competing when examining the final months of 2019 and initial events of the 2020 season.

With the most Global Cup experience on his resume, Teel, a two-time Team USA rider, not only was a member of the event-winning contingent at the inaugural Global Cup in Canada in 2017, but also competed for the second-place Eagles at the most recent edition in Texas in February 2019.

Battling through a knee injury at the 2019 PBR World Finals to finish No. 6 in the world, Teel began the 2020 season with a 2-for-4 performance at the season-launch Unleash The Beast Major in New York City.

Triplett, who rode for Team USA at the 2018 edition of the PBR Global Cup in Sydney, Australia, finished a career-best second at the 2019 PBR World Finals, propelling him to finish the year No. 7 in the world. Not missing a beat, Triplett won the first Touring Pro Division event of the new season in Kearney, Nebraska, before riding to a tenth-place result on the elite tour in New York City.

Much like Triplett, Kimzey earned his second selection to Team USA after making his debut for the Eagles in February 2019 inside AT&T Stadium. The Oklahoma phenom’s selection comes after he recently captured his sixth consecutive PRCA world championship.

A first-time selection to Team USA, Kasel, who is currently recovering from groin surgery, was crowned the 2019 PBR Rookie of the Year after completing an incredible five-month surge up the world rankings, when he climbed from unranked on June 1 to No. 8 on November 10.

Kasel’s rocket up the rankings was capped by his career-first event win on the Unleash The Beast at the final regular-season event of the year in Nampa, Idaho, followed by a twelfth-place result at his debut PBR World Finals.

For the Wolves, Jesus, Jesse and Cravens will make their second-consecutive appearance for the all Native American contingent, while alternate Rogers is preparing to make his debut on the global bull riding stage.

In 2019, Jesus, who was a top contender for the year’s Rookie of the Year honor, finished a career-best No. 20 in the world, capped by a ninth-place result at his debut PBR World Finals. He was a key contributor for the Wolves at the 2019 PBR Global Cup USA, going 2-for-3 in their third-place campaign.

Following their Global Cup debuts, Jesse and Cravens, both had their 2019 seasons halted by injury, with Jesse undergoing shoulder surgery and Cravens sustaining a broken leg.

Both, however, returned as alternates at the 2019 PBR World Finals, before their World Championship contending form was back on display at the season-launch Unleash The Beast Major in New York City. Jesse delivered a strong 3-for-4 showing to finish sixth, while Cravens’ 1-for-3 effort earned him twelfth.

Tickets for the 2020 WinStar World Casino and Resort PBR Global Cup USA, presented by Monster Energy are on sale now and start at just $10. They can be purchased at the AT&T Stadium Box Office, online at ATTStadium.com or SeatGeek.com, or via the phone at (800) 732-1727.

Ahead of the 2020 WinStar World Casino and Resort PBR Global Cup USA, presented by Monster Energy, the final riders set to defend home soil as members of Team USA Eagles and Wolves at the event akin to the “Olympics of bull riding” have been announced.