The gift of coal for Hopi and Navajo families 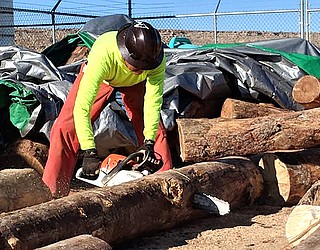 Irvin Huma cuts the logs into smaller pieces before chopping the wood and stacking the cords. Some families on the Hopi reservation are now relying more heavily on wood fires after the reservation the recent closure of the Kayenta Coal Mine. (Photo by Patty Talahongva)

HOPI, Ariz. — Imagine actually wanting to get coal in your stocking this holiday season. Or rather a truck load of coal over cologne, perfume, jewelry or whatever it was that you received.

As holiday gifts go, coal is practical for thousands of Hopi families in northern Arizona who are looking for affordable ways to stay warm this winter now that the Kayenta mine is closed.

It wasn’t a surprise the mine closed but still the Hopi tribal council did not put in place a plan to ensure its people were prepared for the end of a reliable source for heating.

“That’s something that council has not really addressed with the financial crunch we’re in, we knew about this several years ago, the mine was closing,” said Timothy Nuvangyaoma, chairman of the Hopi Tribe. “We’re now facing a situation where the main source of fuel for a lot of homes out here is gone.”

Both Hopi and Navajo families relied on the Kayenta mine to get coal to heat their homes. Now what used to be a four-hour drive has doubled with the closest coal mine in Farmington, New Mexico, nearly 250 miles away. That drive is an economic hardship for many families for many reasons, distance being just one.

Nuvangyaoma took office in December 2017. Since 2005, the Hopi Tribal councils have forseen the closure of the Black Mesa Mine and the Mohave Generating Station. Councilmembers knew the end was in sight for the Kayenta Mine. Still, there is no plan from the tribal government for its people.

Culture seems to be the answer. Sumi’nangwa is a Hopi concept of people working together on something that benefits everyone, out of a compelling desire and commitment to contribute something of value to society.

It is one of the core values of the Hopi Foundation which stresses that philanthropy is a part of Hopi culture.

In a news release, Executive Director Monica Nuvamsa wrote: “We have terms in Hopi that encourage giving or helping others without expecting anything in return — terms like sumi’nangwa, nami’nangwa, and hita’nangwa.”

Darryl James, chairman of the board for the Village of Tewa and Melissa Alcala, community service administrator stand in front of a full cord of wood that’s ready to be delivered. (Photo by Patty Talahongva)

The Foundation partnered with the local fire and rescue department and started a jacket drive earlier in the fall. They collected both new and gently used jackets, gloves, hats and scarves to give away.

“Our count of items people took home was roughly 200 jackets, sweaters and 140 other things,” said Ryan Tafoya, marketing manager for the Hopi Foundation.

“As a community, we already practice philanthropy, especially in times when our families in need rely on us most,” Nuvamsa said.

The culture of taking care of elders was one of the driving forces behind the Village of Tewa’s effort to find a solution to heat homes without coal this winter.

Tewa is one of 12 villages on the Hopi mesas. The reservation is located in the high desert where mostly cedar trees grow and not enough to sustain the entire tribe’s heating needs.

Melissa Alcala was hired as the community service administrator July 15. The board of directors told her her first order of business was to find a solution for heating.

Alcala reached out to Indian Country and after months of negotiating, she struck a deal with the White Mountain Apache Timber Company and The Wood Project was created. Less than four months later, the first load of logs arrived on Oct. 30.

Now, 40 tons of logs arrive each week. Alcala has hired two crews to saw, cut and split the wood by hand.

For the general public, a full cord sells for $240 plus a delivery charge of up to $40.

“We deliver the wood and our guys stack it for you,” she said.

“We don’t want any of our elders overexerting themselves trying to split wood when we do that,” Alcala said. Her team includes Lowell Susunkewa, Irvin Huma, Andre Lucas, Christopher Colleteta and Leonard Sherman.

Alcala said an elder (from another village) called and said he was burning his clothes to stay warm.

“When I found out this gentleman was burning his clothes to stay warm,” her voice trails off. She found a way to help the man.

Like the elders, the disabled and veterans from Tewa Village also get a special rate.

“All of our wood has been seasoned six months or more,” Alcala said. It’s nice and dry and ready to burn.”

Fresh-cut wood tends to emit more smoke. Even the shavings from the logs are sold as komatska, kindling wood

Hopi people aren’t the only ones affected by the coal mine closure. Navajo and non-Native families also need wood to heat their homes.

“We’ve gotten, I’d say, about 30 Navajo families coming over, to buy wood,” Alcala said. “We don’t care who you are, we just want you to stay warm.”

“That fossil fuel thing is just dead, it’s been dead for a long time. We’ve just been holding on to the strings of that, or the tribe has,” Alcala continued “You knew this was gonna happen. You knew this back in 2004. We are now 2019 and 20. Sixteen years you should have done something.”

She called the tribal councils “rogue” for not listening to the people.

“You can’t blame anybody else when you’re up in there making the rules, governing,” she said.

“Why haven’t we considered opening a pit that is primarily for Hopi use on a seasonal basis?” Nuvangyaoma asked. He’s now in the early stages of talking with the Bureau of Reclamation about the possibility of opening a seasonal coal mine to service the Hopi people next year. It’s a federal process that could take the whole year to finalize.

For now his family has purchased a pellet stove for his mother’s house in her village.

The cost of pellets is another financial consideration and it’s a fine option until the electricity goes out, which is a common occurrence at Hopi and then you can’t use your pellet stove. The back up then becomes a propane heater.

Life on the reservation is a far cry from the city grid where most people adjust their digital thermostat at home or use their smart phones to turn on the heat. Electricity is easy in the city. And for decades some of that electricity came from the coal once mined at Kayenta.

Now, what started as an immediate answer to the winter’s cold will be a year-round venture. When the weather heats up The Wood Project will turn into a sawmill. The plan is to start making building materials to repair old homes and build new ones.

“Somebody’s gotta do something about it, so we did,” said Alcala as she looked around the yard piled with logs and watched her crew saw and stack wood.