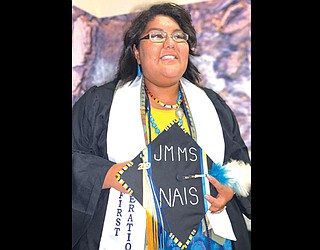 “I feel accomplished, but I’m not done with my education just yet,” she said.

Tewanema has not decided what job she wants, but her double major leaves her many options. She said she could go into education, tribal law, tribal or non-tribal public relations, social work or reporting for newspapers.

“I would like to continue writing, but I enjoy broadcasting better than writing and video production, but that does not mean I am not literate in all (those areas),” she said.

Her advice to college journalism students it that communication is key. She said students need to know their college professors are there to help them.

“They don’t want you to fail. They want you to succeed,” she said. “Time management is a must. There is a time and place for having fun and a time for hanging with friends. There is a specific time for class, studying, homework and reading.”

Tewanema also warns college students not to miss class even if it is tempting to do so.

Tewanema said earning her college degree was especially important to her because she is a first-generation college graduate. She said on the maternal side of her family no one had gone further than an associates degree or even high school.

“On my paternal side, my grandparents have received their degrees and so the pressure was a little more serious,” she said.

Tewanema was able to obtain scholarships, so she leaves college without any debt. But getting through college was more than just money as she also needed various types of support, which came from her involvement with the Native American Center, Ambassador Royalty and friends.

“Without my friends that I made throughout my five and a half years of my undergraduate, I wouldn’t have finished. We all support each other. We all care for each other. We became the family we needed being far away from home. Leaving them was the hardest thing I had to do, but I still support them and will help whenever they need me,” she said.

Tewanema has been selected to serve on a panel that will give a presentation Feb. 5-7 at the American Indian Studies Association 21st Annual Conference at Arizona State University.

“Our panel will be from the Fort Lewis College Native American and Indigenous Studies Department with graduate and graduating seniors research projects,” she said. “My project was to intertwine my two degrees together so the title of my project is ‘Underrepresentation of Native Americans in Mass Media: NO DAPL and Nathan Phillips,’ This will be one of the researches that will be presented from Ft. Lewis College.”

Tewanema said her family was happy about her graduation, but they were curious about her upcoming plans as they asked about a job, a husband and more school.

“But they were happy and excited,” she said.

Tewanema said her focus has been on education.