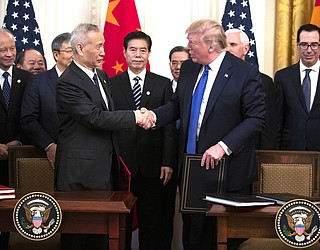 WASHINGTON, D.C. — On Jan. 15, Myron Lizer, vice president of the Navajo Nation, attended the signing ceremony for the Phase One Trade Agreement between the United States and China at the White House in Washington D.C.

During the signing, President Donald Trump signed off on the agreement that requires structural reforms to China’s economic and trade regime in the areas of intellectual property, technology transfer, agriculture, financial services and currency and foreign exchange. The agreement also includes a commitment by China to future purchases of U.S. goods and services in the coming years.

“The reopening of the Chinese agricultural market is a win, not only for the economies of the United States and the Navajo Nation, but for the global economy. Currently, the Navajo Agricultural Products Industry, an enterprise of the Navajo Nation, has more than 8,200 acres of crop production specifically designated for export to Asian markets,” Lizer said.

Lizer joined Trump as well as Chinese Vice Premier Liu He, Beijing’s chief negotiator for the agreement, and business leaders for the ceremony held in the East Room of the White House. On Dec. 13, 2019, China announced the agreement “based on the principle of equality and mutual respect.”

According to the White House, the agreement will begin rebalancing U.S. trade relationships with China and provide new opportunity for American businesses and farmers. The agreement also addresses intellectual property related to numerous longstanding concerns in the areas of trade secrets, pharmaceutical-related intellectual property, geographical indications, trademarks and enforcement against pirated and counterfeit goods.

“We are optimistic that the intellectual property portion of the agreement will provide some relief and safeguards to deter the selling of counterfeit items that are marketed as authentic Navajo jewelry, when in fact they are counterfeit and produced overseas. Our Navajo silversmiths and artists are very talented and gifted and they deserve to be protected against producers that try to sell counterfeit Navajo jewelry on the open market,” Lizer said.