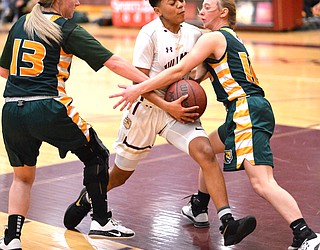 In the Winslow girls’ 45-20 win, the Lady Bulldogs shut out the Lady Cougars 8-0 in the first quarter, and were up 19-3 at the half and 30-11 after three quarters. Kylie Begay led all scorers with 13 points. Brianna Little with 13 points and Aliyanhna Vogele with 10 points were also in double figures for Winslow. No Lady Cougar had more than five points.

In the Winslow boys’ 82-55 win, the Bulldogs took a narrow 17-15 first quarter lead and expanded it to 40-28 at the half and 60-37 after three quarters. Tyrell Young led the Bulldogs with 21 points. Zach Wagner with 17 points and Dustin Richard had 10 points. Colton McGinnis of Show Low was high point scorer with 22 points. Thadeus Carlyon with 13 points and Cougar Cooke with 10 points were also in double figures for the Cougars.

Both Winslow teams played on the road at Holbrook Jan. 17 and at Blue Ridge High School in Pinetop Jan. 21 before returning to host Payson Jan. 24, Monument Valley Jan. 25 and Snowflake Jan. 28.