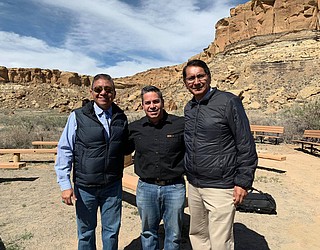 CHACO, N.M. —Lawmakers from the country's largest American Indian reservation may have thrown a wrinkle into efforts aimed at establishing a permanent buffer around Chaco Culture National Historical Park, as New Mexico's congressional delegation, environmentalists and other tribes try to keep oil and gas development from getting closer to the World Heritage site.

Navajo Nation delegates voted Jan. 23 to support a buffer only half the size of the one outlined in federal legislation pending in Congress. They cited concerns from Navajo landowners who fear their mineral rights would be landlocked and the money they earn through lease payments and royalties compromised if future development is prohibited across a wider swath of land surrounding the national park.

Supporters of the measure approved by the tribal delegates argue that a smaller 5-mile buffer would protect the economic interests of Navajo landowners.

New Mexico's congressional delegation says considerable time was spent drafting the legislation and that they worked with Navajo leaders and members of the All Pueblo Council of Governors, an organization that represents other sovereign tribes around New Mexico.

The Navajo vote comes despite support from the pueblos, Navajo President Jonathan Nez and some individual Navajo communities for the more expansive protective zone. It highlights the polarity that has long existed within the Navajo Nation's branches of government and with other tribes.

Nez said Jan. 24 he believed the tribe was unified on the 10-mile buffer and that much of the discussion in the council was one-sided. The vote, he said, could affect movement of the bills in Congress.

"It's quite concerning to us that this type of messaging, especially with the new council, could be seen by members of Congress in a confused state," he said. "I would be."

The measure's sponsor, Mark Freeland, told fellow lawmakers Thursday that various Navajo departments and the lawmakers weren't consulted on the creation of the federal legislation. Landowners who are concerned about their ability to lease their land for drilling weren't given time to speak with members of Congress who visited Chaco last year either, he said.

"There was a disregard or dis-acknowledgement for any of our people ... and that was very disheartening to see," he said.

The measure also included a request for updated maps, the number of landowners in the 5-mile and 10-mile buffer zone, and more consultation with the Navajo Nation.

Nez said he, too, would welcome a visit from U.S. senators to the Navajo Nation as they consider the federal legislation.

Chaco Culture National Historical Park is at the center of a decades-long debate over how to manage oil and gas development in a sprawling area of northwestern New Mexico that is dotted by sites tied to the park but that lie outside its boundaries.

The U.S. House in December approved legislation prohibiting drilling on the checkerboard of federal land that borders the park. The measure also calls for terminating existing non-producing leases in the area and suggests more studies and protective measures be taken to address health, safety and environmental effects on communities and tribal interests. Similar legislation is pending in the Senate.

Federal land managers have been deferring interest by the oil and gas industry in parcels within a 10-mile radius of the park to address the concerns of environmentalists and some Native American leaders. The legislation would codify that practice, essentially formalizing the buffer around the park.

While the congressional measures wouldn't affect oil and gas development on their land, the allottees believe the industry would pull out of the area if it cannot access the federal land. That would mean millions of dollars in lost revenue for some families on Navajo Nation, which has struggled for years with high rates of poverty and unemployment.

New Mexico's congressional delegation reiterated in a statement to The Associated Press that the legislation "explicitly and fully protects the rights of the Navajo Nation and Navajo allottees" to continue to develop their land as they see fit.

The Democrats also noted that the Navajo president and pueblo leaders came together in "historic fashion" to support the safeguarding of sacred sites and other areas of cultural significance outside the park's boundaries.

The lawmakers say they plan to review the latest Navajo resolution and continue to consult with stakeholders as the legislation moves forward.

The measure calls for withdrawing nearly 500 square miles of federal land holdings around Chaco park, preventing future leasing of mineral rights. U.S. land managers say less than one-quarter of the federal holdings within the larger buffer zone are currently leased. Most of the land in the area belongs to the Navajo Nation and tribal allottees.